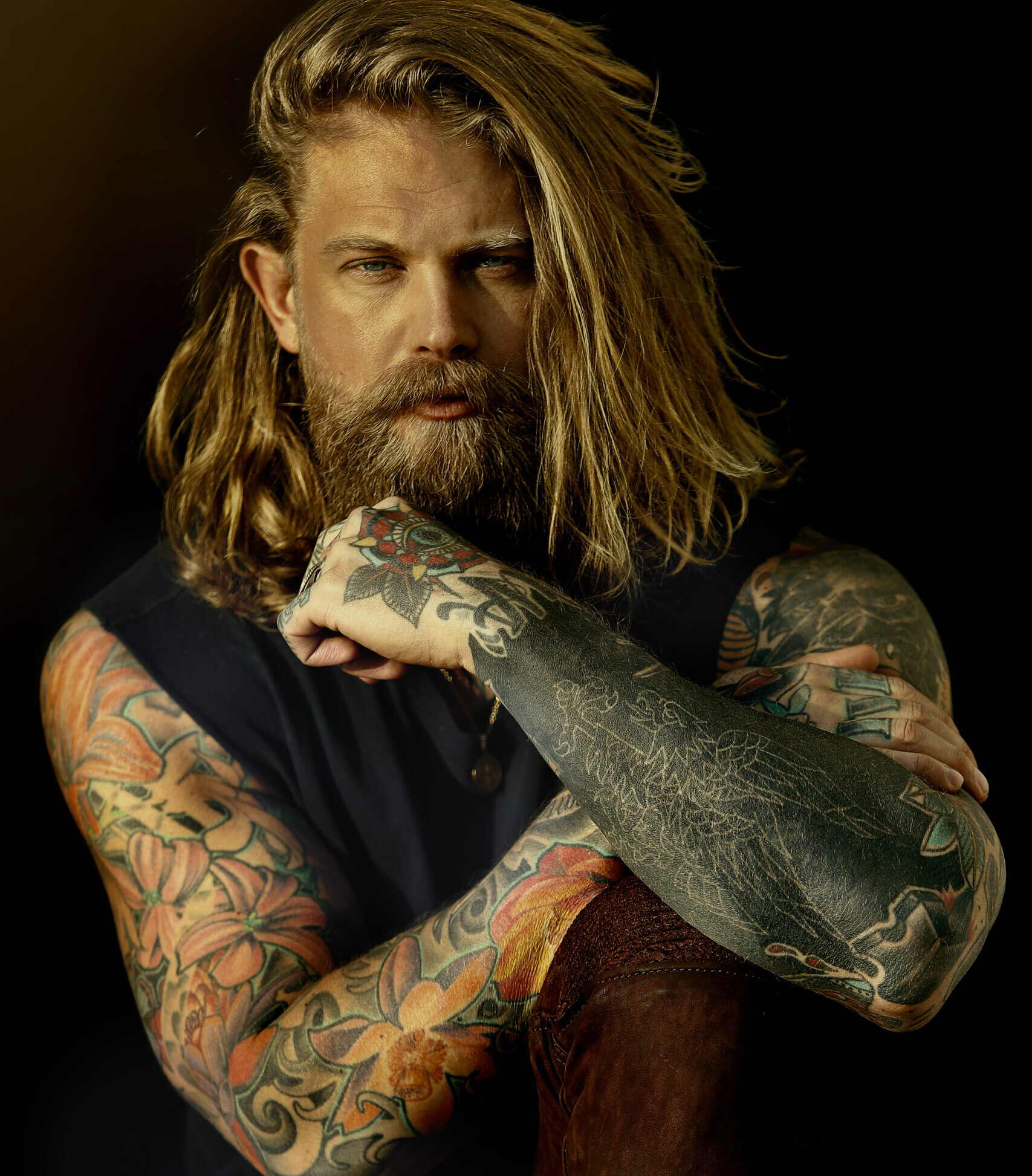 At first glance, the man behind the Instagram account @spizoiky might seem to be just another pseudo-Viking whose penchant for leather jackets and motorcycles make him a suitable ambassador for beard oil companies. But Josh Mario John is different.

The distressed jacket on his back is from his brand that he started with two close friends, and the photos you see were taken a few minutes outside of the town where he grew up and still spends most of his time.

He is a member of the Instagram influencer generation, one who has made a comfortable living off of his rugged looks and 880k followers, but he has done so on his own terms.

Josh (real last name Negusanti) is fresh into his new venture, a line of leather goods called Master Supply Co. They have more than nine different jacket styles for D2C sales with the Canadian market in mind.

Starting a clothing brand is no easy feat, but it allows him more flexibility than his endeavours as a model for global fashion and lifestyle brands. Negusanti has seen what that industry has to offer, but ultimately likes being in control of his destiny. And now, he wears exactly what he wants to.

“We are much less concerned with trends and the whole fashion side of things,” he says about Master Supply Co. “Every piece we finalize is a piece that I’d love to have in my closet.” 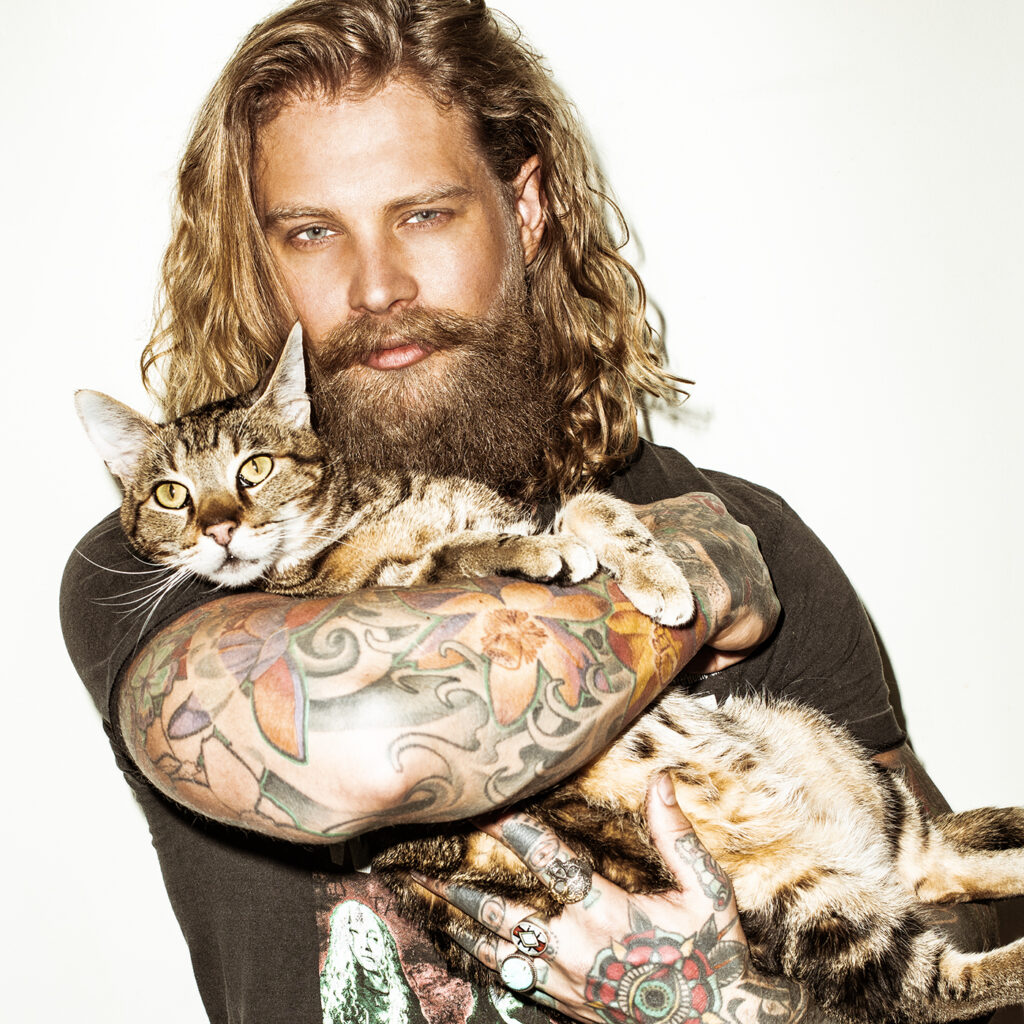 At Home with Jana, the Cats, and the Dogs

While designing new collections and managing the business, Negusanti spends most of his time in his home and birthplace of Sudbury, Ontario. He lives down the street from his parents’ house with his wife, Los Angeles transplant Jana (@Jana24seven).

They live with five cats and two dogs, and Negusanti considers himself a cat person. They found one cat as a kitten on the side of the interstate in North Carolina, and Jana recently brought home the two canines after going out to buy cat food. He says that the big new family is as happy as can be.

He studied at Sudbury’s Laurentian University, holds two degrees (a BA in psychology and MA in experimental psychology), and has spent years working as a child welfare supervisor. “Child welfare will [in addition to fashion and modelling] always be my career,” he says. “I still have a lot I’d like to accomplish and appreciate how fortunate I am to work for the children and families in my community.”

His education in psychology has also benefited him in how he views the fashion and modelling industry.

“Having my social psychology background, I’m also very aware of social comparison theory and the negative impact that engaging in this can have on mood.”

He has an educated view of the unrealistic standards that are promoted through social media. And this has led him to have a rational outlook on his career. In interviews, he almost always speaks of the short shelf life that is commonplace in the modelling industry, and the need to bring other skills to market yourself when things ultimately slow down.

This is remarkable for someone who, just a few years ago, was flying back and forth from Sudbury to the fashion capitals of the world to shoot for magazines like Rolling Stone, Elle, and Maxim. He has partied with the world-famous glitterati and worked with Harley Davidson, Diesel, Kiehls, and many more.

His appeal came from his chiselled looks, long beard, and the colourful tattoos covering his body. His first tattoo was an upper-arm piece at age 24 that honoured his Grandmother—an artist. Although he was concerned about how a full sleeve would affect his child protection career, his outlook has since changed. 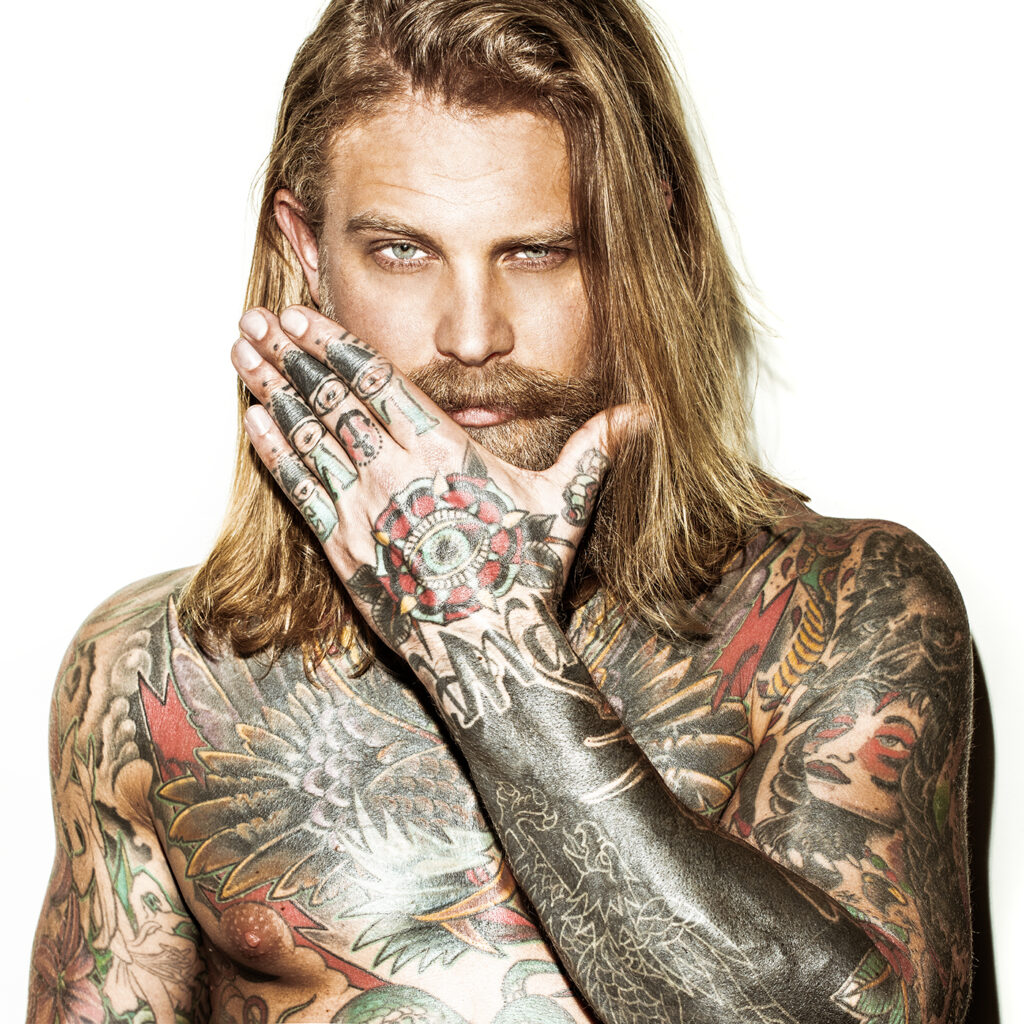 “I eventually came to the realization that tattoos would only be a barrier—if I let them be,” he says. He has no idea how much he has invested in the tattoos and has plans to fill in the rest of the blank spaces on his body.

What started as a few outdoor photoshoots with Toronto-based photographer and friend Lane Dorsey which led to opportunities that he could never have imagined. This even included a brand’s offer to take his wife and family to the Grand Canyon for a private helicopter tour.

Even before the pandemic, he stayed close to home and worked on his passion project. Josh started Master Supply Co. with Dorsey and another partner. This has kept him busy, even as the odd request comes in for collaborations.

“Starting a brand has been something that’s been a long time coming,” says Negusanti. “It’s always been a dream of mine, and most importantly, it’s a means of sustainability for me in the fashion world.”

He has been hard at work developing new items for 2021, which will broaden the product listing to include additional women’s outerwear, boots, denim, and accessories. Master Supply Co. is leather outerwear focused, with ethically sourced and sustainable materials produced with vegetable-based dyes and REACH certified chemicals.

Even as Negusanti chases new goals, it is essential for him to stay grounded. His philosophy towards how to share his life through social media remains the same, and he focuses on showing “real life as opposed to highlight reels.”