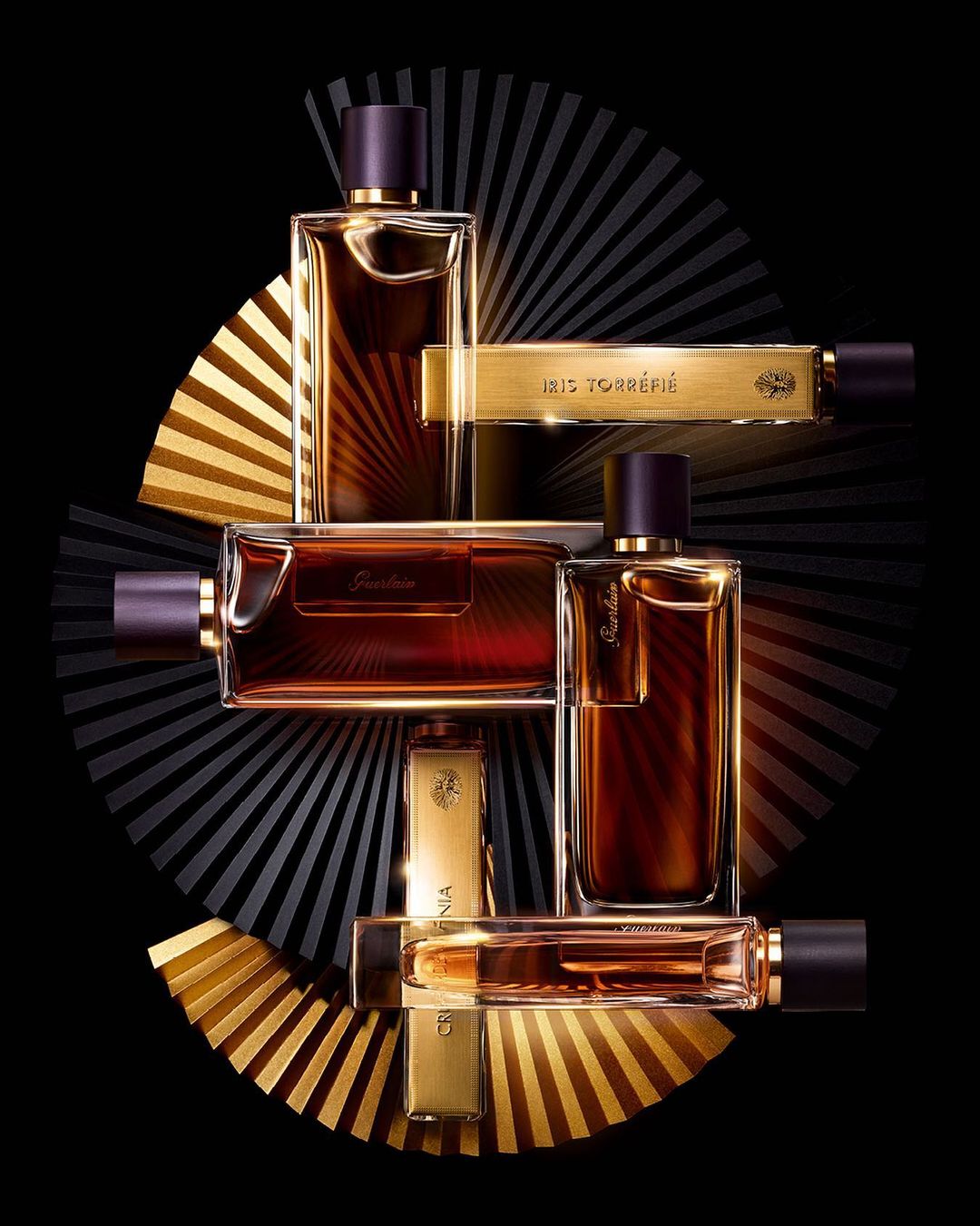 Autumn has been busy for Maison Guerlain. Such as the season brings new colours and scents and eagerly awaited old favourites, the Maison has two new perfumes that celebrate iconic ingredients in an unprecedented fashion, as well as the exciting return of one of their historic fragrances. Les Absolus D’Orient and L’Art et la Matière welcomed their latest additions in September. Fol Arôme, first experienced in 1912, made its reappearance in October. 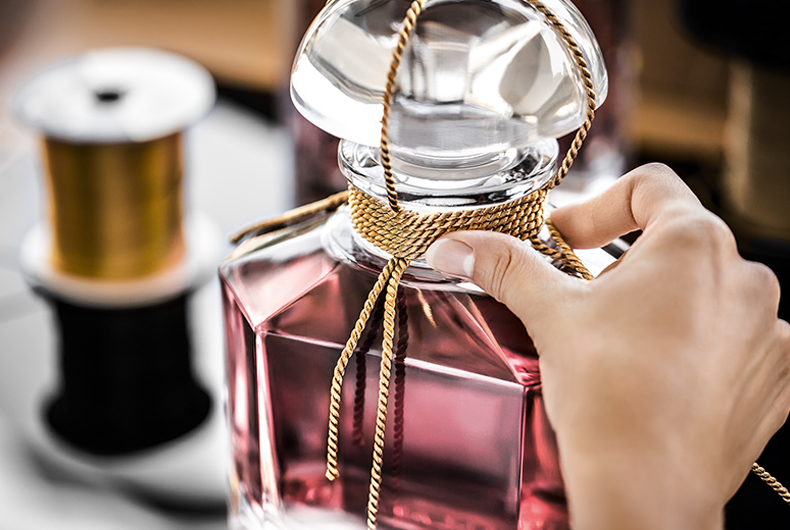 First launched in 2014 with the scent of Santal Royal, Les Absolus D’Orient has grown to a seven-perfume collection dedicated to paying homage to all the delectable olfactory treasures the East offers. This voyage continues with Patchouli Ardent, a divergence from its traditional dark, woody associations. Patchouli was first introduced to Europe from South East Asia in the 17th century. It was used in potpourri as well as to protect fabrics on long-winded trade journeys. This fragrance became representative of two contrasting ideas: a symbol of refinement and the hippy generation’s scent hallmark. 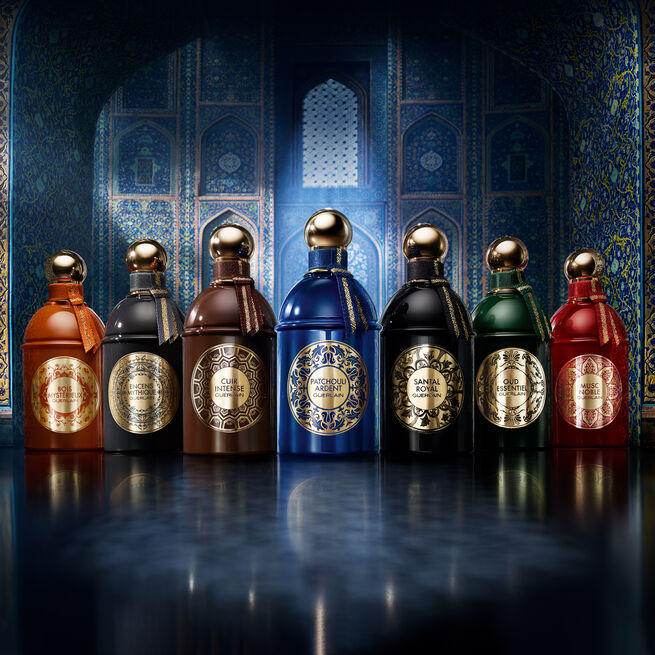 This new addition, Patchouli Ardent, celebrates this iconic ingredient while also reintroducing it to the world in a new light. Over several hours, the layers of the scent reveal themselves to the wearer. First, spicy pink pepper and intense black pepper dance with soft fruity greens and subtle fig. At the heart of the fragrance, you will find patchouli and rose. As the hour’s tick by, deep woody scents stretch into a leather-musk accord. All of this lives together in a blue lacquer bottle with gold accents, inspired by the legendary bee bottle of 1853.

A Most Unlikely Relationship

Iris has long been used by Guerlain and can be found in various perfumes since the 20th century. It can be found in early creations, such as L’Heure Bleue and Après L’Ondée. It is an exceptional raw material and a favourite of the Maison. When creating the latest member of the L’Art et la Matière collection, Iris Torréfié, Guerlain Perfumer Delphine Jelk took the exalted iris and disturbed it a little. In channelling the iconic cafés of Paris; with their lively terraces and myriad of scents, she has invited you to partake in the carefree reverie of French art de Vivre. Revert to a time when writers congregated to the coffee shops and bars of Saint-Germaine-des-Prés to discuss literature and reinvent the world bustling around them. 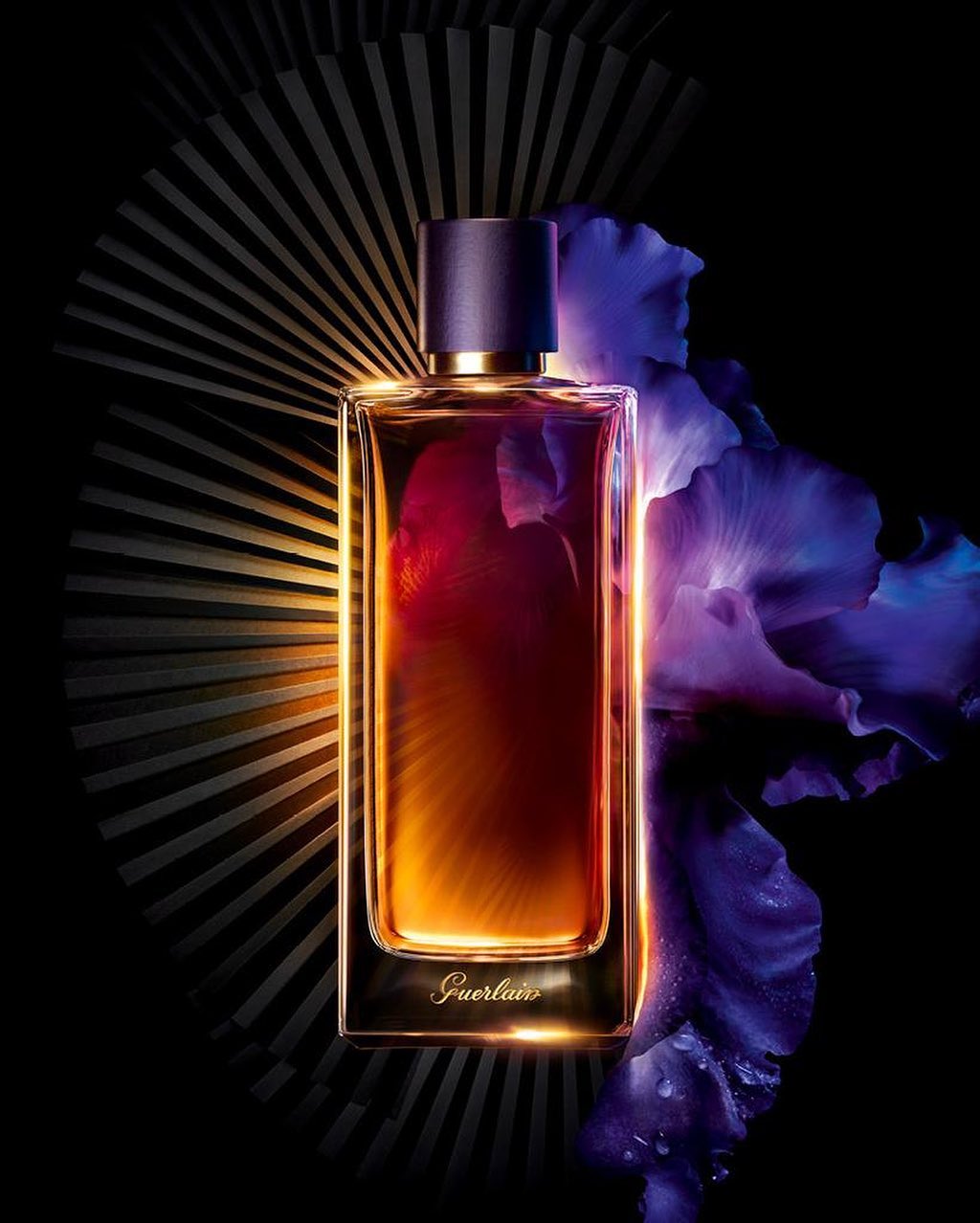 For Iris Torréfié, the delicate lavender-coloured Iris Pallida was selected. This dainty flower is in for a startling encounter. The top notes of this scent are of full-bodied coffee, accentuated with cardamom, and a hint of bergamot. At its core, you will find the sensuous iris blooms – iris pallida butter enriched with ambrette seeds. The base is where you will find the unmistakeably Guerlain touches. Vanilla tincture offering woody, leather-like qualities and what Delphine calls “the Shalimar amber”: opopanine, which delivers the balsamic, ambery note that peak through the iris and coffee. This in-depth conversation between these two contrasting ingredients is housed in a sleek modern bottle, adorned with a metal panel reminiscent of precious hardcover volumes. All of it topped with an elegant wood cap.

The Re-Composition of a Bygone Era 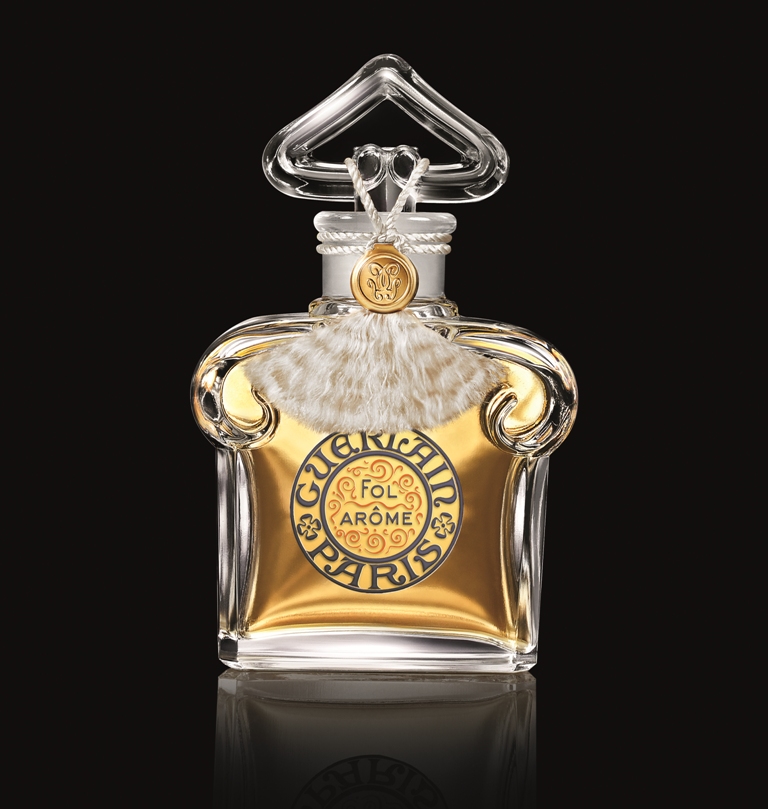 The Maison continues to take long strides forward new horizons. They do not shy away from progress and modern ideas, as demonstrated by Patchouli Ardent and Iris Torréfié. Even while doing so, they hold their long history near, instead of shedding it as bygone times. Nearly two centuries of heritage cannot-and should not-be ignored. Originally composed in 1912, Fol Arôme reflects an exuberant Belle Epoque Paris. The city shone with excitement and carefree pleasure; modern art was well on its way, with Cubism as its height. Third generation Guerlain perfumer, Jacque Guerlain drew inspiration from Impressionism for his compositions. He would put his name to numerous masterpieces, including Mouchoir de Monsieur, Après l’Ondée, and L’Heure Bleue.

When originally released, Fol Arôme was an audacious creation, being neither male nor female. It was a thunderous encounter of male-coded aromatic notes and the full floral bouquet of femininity. Its top notes offer the wearer refreshing mint, zesty bergamot, peach, and lavender. At the heart, you will find rose, narcissus, Jasminum grandiflorum, and sage. The base note brings the experience to a close with vanilla, spicy carnation, sweet acacia, powdery mimosa, and iris.

Guerlain perfumer Theirry Wasser has orchestrated the re-composition as faithfully as possible to the original, choosing three floral absolutes: Grasse rose, narcissus, and Jasminum grandiflorum. It would not be the same without the original bottle, of course. Produced by Pochet du Courval, one of the two original glassmakers, has recreated the precious upside-down heart bottle. The circular label has been faithfully recreated, complete with its yellow background, blue-grey embossed lettering and red-orange arabesque swirls. This careful re-composition of the iconic 1912 perfume will not be a permanent addition to Guerlain shelves; this run is limited and numbered.

For those looking to add perfume to their rotation-or in the case of Vol Arôme, a new perfume to their collection-Maison Guerlain delivered a trio of scents to please the decerning perfume aficionado. Autumn brings new sights, sounds, tastes, and odours, so why not treat yourself to something new to match the season. If you have the patience to wait, drop a few hints in the coming months. 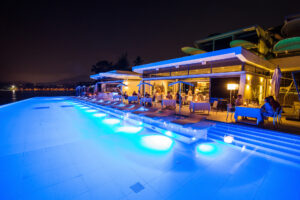 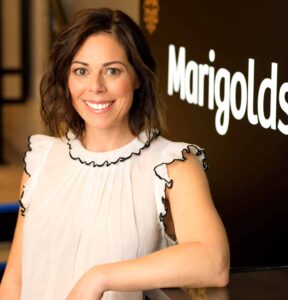 Next post EcoLux☆Lifestyle: Fall is Blooming Brightly at Marigolds Cannabis

Gastown’s Pourhouse Does the Season Right with Cocktail Countdown!

Tasting Plates on the Folke Patio in Kitsilano